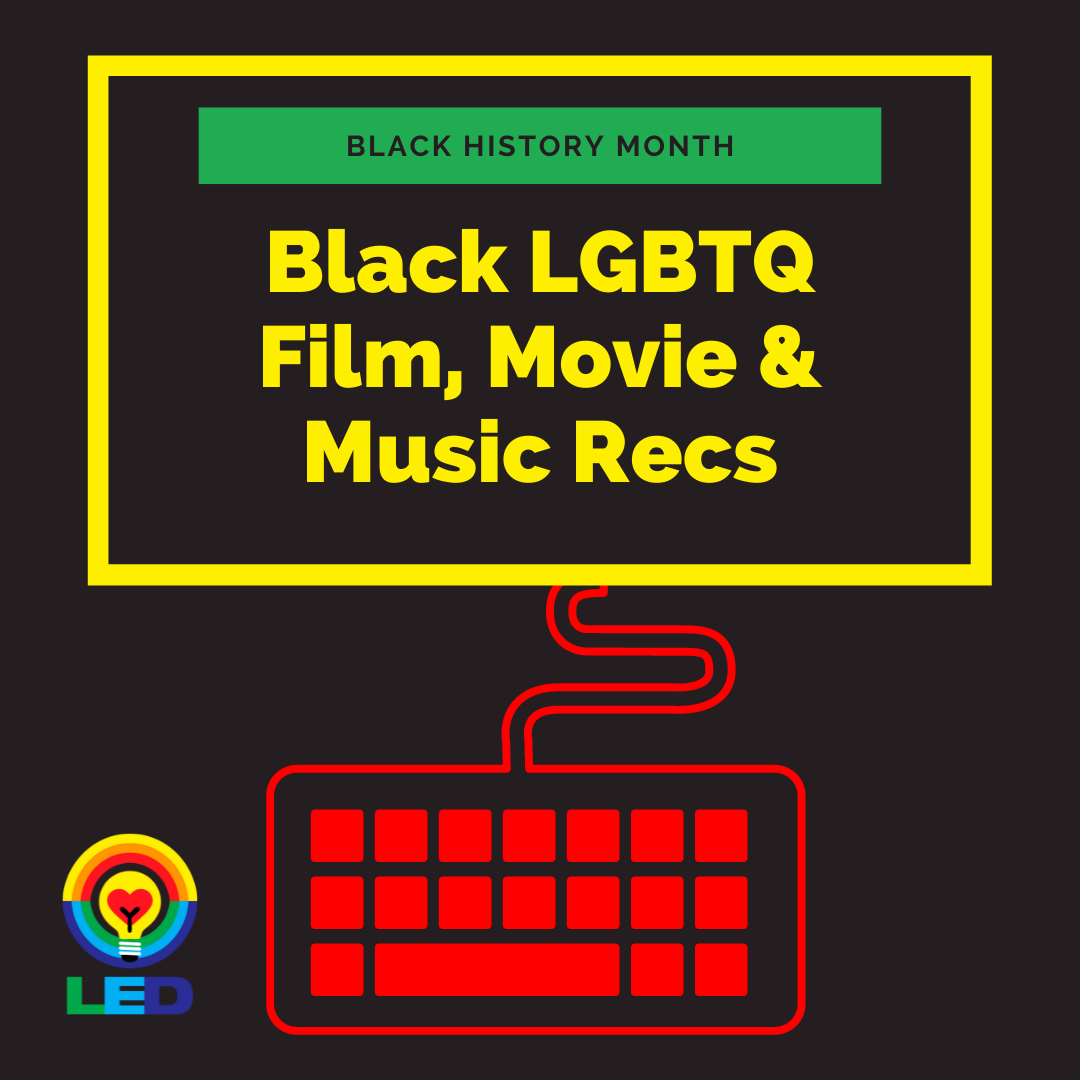 Check This Out, LGBTQ+, LifeStyle, Queer Life
by koalatygay

February is Black History Month! Love Every Dragon is celebrating by sharing a list of entertainment that feature Black LGBTQ stories–from films to books to music. Get your watchlists and Spotify accounts at the ready!

Have you ever watched a film and not connected to it in any way? Minority populations run into this disconnection all the time. When I first realized I was queer, I found myself constantly bored by every movie I watched. None of them were about me.

But as a white queer person, the past decade has given me a solid handful of fulfilling movies. But the world is still lacking on Black LGBTQ films. Here we have a lineup of 5 great Black LGBTQ movies. (Though the world is certainly ready for more.)

Paris Is Burning is a classic place to start when it comes to Black LGBTQ films. The documentary showcases drag ball culture of the 80s and explores the intersection of sexuality, gender and gender expression, race, and class.

Tangerine is a film about Black trans women who are sex workers. It’s all about the street life, their reality, and raw emotion. This dramedy tears viewers in all directions. What’s perhaps even more impressive than a movie about Black trans sex workers is that the entire film is shot on an iPhone 5S. A little gritty but so very real.

This Black LGBTQ film takes us to Kenya, where Rafiki depicts the budding friendship turned relationship of two women. With Kenya’s criminal offense of homosexuality, the relationship between the two characters encounters much conflict and political pressure.

You might remember this film for being the Academy Award winner for Best Picture. This coming-of-age film features the main character, Chiron, in his life challenges. This film ties together themes of identity, Blackness, masculinity, and what it means to be vulnerable.

For those that don’t know, Martha P. Johnson was a prominent figure for LGBTQ rights during the Stonewall Riots. This documentary relives some of Martha’s greatest accomplishments and follows this Black trans woman through key moments of gay liberation. The Netflix original also calls into question the police’s ruling of her death as a suicide, as many believe she was murdered without a proper investigation.

From fiction to nonfiction, young adult to dystopian novels, this roundup of books about Black LGBTQ people has something for everyone.

How We Fight For Our Lives by Saeed Jones

This book was my first read of the new year. It follows author Saeed Jones through childhood and into young adulthood as he navigates growing into himself. The memoir touches on the intersection of race, class, sexuality and the pull of familial ties.

Coffee Will Make You Black by April Sinclair

This Black LGBTQ+ YA novel tells the story of Stevie, a Black queer/questioning girl from a working class family during the 60s. The book follows Stevie as she calls her intersecting identities into question during adolescence–at a time when peer pressure to conform happens amidst the Civil Rights Movement.

An Unkindness of Ghosts by Rivers Solomon

An Unkindness of Ghosts is a dystopian, science-fiction novel with dark and complex undertones. In a space vessel that reflects the organization of the antebellum South, protagonist, Aster, uncovers secrets and mystery. Without primary focus, the book unravels stories of queer acceptance, where many characters use gender-neutral pronouns and fall away from a cisheteronormative society.

Felix Ever After by Kacen Callender

This queer YA novel follows our main character, Felix, as he is caught up in teenage drama: cyberbulling and love triangles. This book touches on the intersecting identities of Blackness, queerness, and transness in a tale of self-love.

Zami: A New Spelling of My Name by Audre Lorde

Finally, we have a “biomythography” from Audre Lorde. Lorde uses “biomythography” to describe a story that is part autobiography and part myth. It is a coming of age story from Lorde’s childhood to adulthood during the 50s.

When I started listening to queer musicians for the first time, I finally heard a love song that made sense to me. Love songs or not, this list of Black LGBTQ artists has a little something for everyone, but most importantly, something for Black LGBTQ people.

Janelle Monáe is a queer singer and rapper (and actress!) from a working class family in Kansas City. Her songs often relate to her intersecting identities and background. Her song, PYNK, is a queer anthem for many sapphic people.

With vocals similar to The Weeknd’s, Serpentwithfeet has some serious, rich sounds. With deep, familial religious roots, gospel music had a huge influence on this Black artist’s sound. Serpentwithfeet has since used his choir days to mix gospel sounds with his iconic experimental tracks, often expressing his gay identity in the process.

CHIKA is a Black LGBTQ rapper with roots in Alabama. With a background in slam poetry, CHIKA brings sharp rhymes to her tracks. But that doesn’t stop her from softening up with sweet sapphic love songs like “CINDERELLA, Pt. 2.”

Joy is an Arizona-born Black queer artist born of Nigerian immigrant parents. She funded her first debut album in 2016 through crowdfunding on Kickstarter and hasn’t stopped creating since. Several of her songs depict life as a Black American and critique systemic racism.

Shea is a Black trans woman with a big, soulful voice. Her soul and R&B sounds now has one EP and 9 singles. You also might recognize her voice from songs on the Happiest Season soundtrack–that lesbian holiday movie with Kristen Stewart.

What Black LGBTQ+ creators will you be checking out this month? Let us know in the comments!

No feed found with the ID 1. Go to the All Feeds page and select an ID from an existing feed.