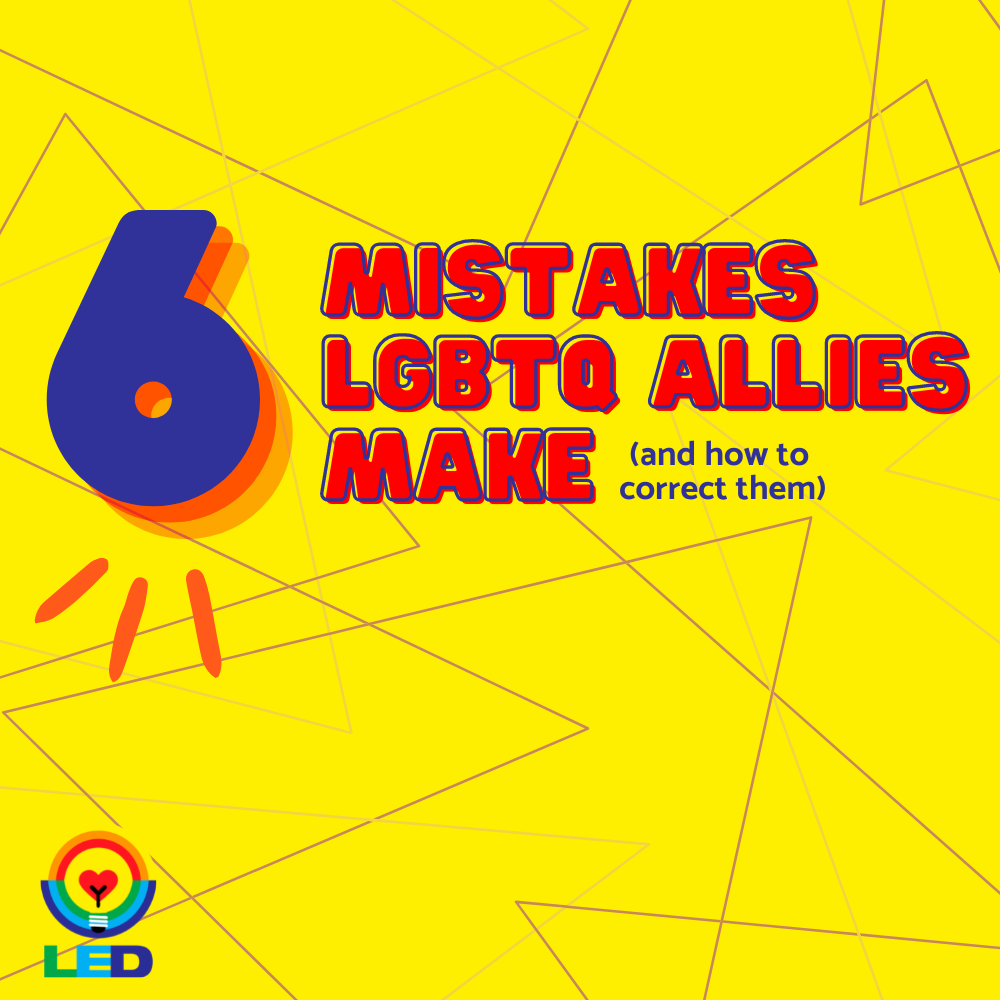 6 Mistakes LGBTQ Allies Make (and How Correct It)

LGBTQ allies are so valued and appreciated within the queer community. We need allies for support, affirmation, and advocation. That being said, LGBTQ allies make mistakes, even when the intention is good. It can be hard for queer people to communicate those mistakes, for it comes across as ungrateful. However, the greatest allies are great listeners. They’ll take in feedback, reflect, and alter behavior. So, if you’re an LGBTQ ally ready to learn, thanks for reading! With the help of my LGBTQ friends, followers, and years of my out queer identities, I’ve compiled a list of the top 6 mistakes LGBTQ allies make (and how you can do better).

Far too often, people accept tolerance of LGBTQ+ people as the end-all goal. Tolerance, though, is just the beginning. The community needs allies who are loud and visible, people who don’t stop or settle.

Marriage equality was a huge win for LGBTQ+ Americans, but the fight didn’t stop there, though many straight cisgender people counted this step forward as the last step forward. Allies who continued pushing after this victory and continue pushing now–those are the kinds of allies the community needs.

Great allies don’t stop at the tolerance of others, either. The queer community needs cisgender, straight allies to speak up when other non-queer individuals say something offensive. When allies correct cishet people who misgender someone or make derogatory comments about queer people, that is exactly the kind of visible allyship we need. You’re telling us that you respect us, that you won’t tolerate others’ disrespect toward us, and that we can turn to you for support.

2. Say “love is love” when you see an LGBTQ couple

On the flip side of “stopping at tolerance,” LGBTQ allies can have a tendency to over-emphasize how loving, accepting, and supportive they are of queer people. This kind of over-emphasis becomes uncomfortable when it’s not warranted or when it draws unwanted attention to queer people or couples, especially in public. And while great allies are visible to the community, there is an appropriate time, place, and intensity level to share that support.

A general rule of thumb allies can follow is to not center a person’s queer identity without an invitation. For example, I’ve encountered plenty of unwanted attention focused on my lesbian relationship by simply existing in public. One time, a person commented “love is love no matter who they are” on a Facebook post I made in spirit of Valentine’s Day. Another time, a stranger on the street pointed to my partner and I holding hands on a date, shouting “Love IS LOVE!”

These people over-emphasized their support for queer relationships when the situation didn’t call for it. If I walked to a museum on a date with a man, no one would say anything to me. Instead, a person drew attention toward us, which is not only anxiety-inducing to have half a dozen people’s eyes on you, that attention could have put my girlfriend and me in serious danger had any homophobic people overheard. We spent the rest of our date careful to avoid touching each other in public because an “ally” wanted us to know they supported us.

Making mistakes is a part of learning how to be a great ally to the LGBTQ community, and apologizing for those mistakes is necessary, so over-apologizing may seem impossible, but it can have a big impact on queer individuals.

Let’s say my friend accidentally uses “she/her” pronouns for me after I came out as non-binary and changed my pronouns to “they/them.” Instead of quickly apologizing and correcting herself, an over-apology might look like: “Oh my gosh, I am so so sorry for misgendering you. I know your pronouns are they. It’s just so hard for me to get used to it. I’m trying really hard, I swear.”

In this case, the ally centered herself and her experience around my pronouns and gender identity. It forces me to respond by soothing her, letting her know “it’s okay” or “I understand” when misgendering actually causes more stress to the person who gets misgendered.

This is true for any situation where the ally made a mistake and over-emphasizes their own feelings about the mistake, rather than simply apologizing and moving forward. If your apology requires your LGBTQ friend to soothe your feelings over their own, you’re apologizing wrong.

4. Use gender-neutral pronouns for everyone

Normalizing they/them pronouns in situations where the gender of the subject is unknown is also a great practice for allies to have. For example, in the paragraph above, I mentioned that when “someone refers to me in the third person, they would say…” Rather than using he or she for the subject, someone, I defaulted to gender-neutral pronouns since the subject’s gender is unknown.

The mistake happens when allies use gender-neutral pronouns for everyone, even when the gender and pronouns are known. For example, my sister is a woman who uses she/her pronouns. If a friend referred to her using they/them pronouns whilst knowing her gender identity and pronouns, defaulting to they/them pronouns in this situation is misgendering my sister. Using the wrong set of pronouns in situations where you know the person’s pronouns is misgendering.

5. Say any variation of “Why can’t we all just love each other?”

This mistake comes in various forms of dissmissive comments that are usually well-intentioned but still hurtful. Other variations include:

While each type of comment points to love as its undertone, such comments are very dismissive of a queer person’s identity. For many LGBTQIA+ people, their queer identity means a lot to them.

When I first came out, I identified completely with my queer identity. I finally understood myself, my past, my childhood, my anxiety, my relationship with others. Being gay shaped my personality before I knew I was gay. It shapes the way I experience the world, and it shapes the way the world experiences me. At certain points, labels meant a great deal to me and furthered the understanding I had of myself and my community. There’s a secure recognition in having a word for how your life operates.

Even as the years since coming out have lessened my need to strongly identify with my queerness, it’s still an inseparable part of myself. No, my house isn’t decorated in rainbows (okay, a few rainbows), but I am a lesbian. I am nonbinary. My life will always be shaped by my queer identities. Life will always offer me unique challenges because I am queer. I will experience distinct joys in life because I am queer. I am not the whole me without my queerness.

Then, enter an “ally” who hears I am a non-binary lesbian and says, “Who cares about labels? Who cares what you are? Let’s just all love each other.” I care about labels. I care about what I am. It took me a long time to accept those parts of myself, and now that I have, I love myself more for it. Such comments flatten my identity and erase parts of myself that deserve celebration.

I do believe that allies belong at Pride, but as you’ve learned through the blog post, there’s a right way for allies to attend Pride. First rule of thumb, Pride is not a party.

Pride is a celebration of queer identity, an uplifting event to recognize queer contributions to society, our milestones, remembrance of all our siblings who came before us, and all our work yet to be done for our siblings coming after. It’s a relief from persecution and discrimination–a break from headlines of anti-trans bills blooming across the country, of two women beaten bloody on the public transport, of murdered siblings, of Pulse, of bans from the military, of bullied teens’ suicides. It’s an exhale after our life challenges–being misgendered or deadnamed or bullied or threatened, thrown out of parents’ homes as a teen, keeping a secret from people you love, hating yourself, believing you’re going to hell when you die, wishing you were someone else, being afraid. Pride relieves us of that. And Pride can never mean that to someone who isn’t queer.

I’ve seen too many of my straight, cisgender Facebook friends post photos of themselves and Pride, a few of them talking about how much they learned, how brave they were for diving in to learn, sometimes even confessing that Pride made them “uncomfortable,” but they stayed to educate themselves regardless. People don’t post that for the LGBTQ+ community. They post it for themselves, for a little pat on the back, and to look like an ally. Strong allies don’t center themselves in LGBTQ+ spaces; they support queer people and pass them the microphone.

When you go to Pride, ask yourself why you’re there and what you’re doing for the community and/or the LGBTQ+ people in your life. If you’re going to post about attending, be conscious of what you’re saying.

One person I know posted pictures of herself at Pride with a caption that said something like, “I went out of my comfort zone to educate myself and now I’m a better person for it,” whereas my sister post a picture of a Pride that she took me to and said, “Be an ally for all kinds of love.” Notice the difference.

Great allies make mistakes and learn from them

Know that it’s okay if you’ve made this mistakes before. You’re reading this post because you want to be a good ally to LGBTQIA+ people and that counts the most. Now you can take this knowledge with you moving forward, understanding your impact a little better, and challenge others and yourself to be better allies for the queer community.

No feed found with the ID 1. Go to the All Feeds page and select an ID from an existing feed.